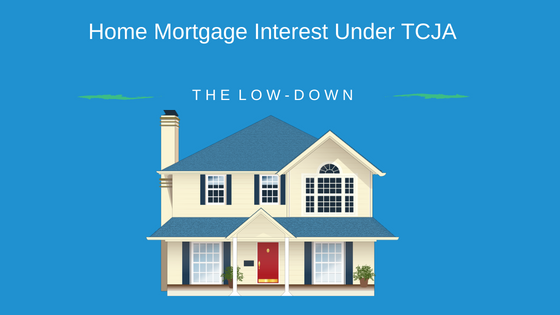 Posted at 19:18h in Tax by Jeff Zappone 0 Comments

The Tax Cuts and Jobs Act (TCJA) made some changes to the deductibility of both acquisition and home equity mortgage interest. However, these rules are only going to affect taxpayers who itemizes, and many folks will no longer itemize because the TCJA substantially increased the standard deduction for tax years 2018 through 2025. But for those taxpayers who will continue to itemize on their personal returns, take note. Let’s first begin with some background.

Prior to January 1, 2018, a taxpayer could deduct interest on up to $1 million ($500K if married filing separately) of debt used to buy or substantially improve a first or second residence. This is called “home acquisition indebtedness.” A taxpayer could also generally deduct interest on another $100K ($50K if married filing separately) of home equity indebtedness, regardless of how the proceeds were used. For example, a taxpayer could have taken a draw from a home equity line of credit and used the funds to pay off a credit card or purchase a new car and taken a tax deduction for the interest paid if the total balance on the debt was $100k or under because the HELOC was secured by a principal residence. However, the home equity interest deduction only applied to regular tax, not alternative minimum tax (AMT). So, in total, a taxpayer was able to deduct, for regular tax purposes, interest on $1.1 million of home mortgage interest ($1 million in acquisition indebtedness and $100k of home equity mortgage interest).

Under the TCJA, though, the rules have changed. Now, the debt limit on home acquisition indebtedness has been lowed to $750k, and home equity indebtedness interest is (generally) no longer deductible at all. The good news for taxpayers with older mortgages is that there is a grandfather provision for home acquisition debt; the TCJA doesn’t affect such deductions of up to $1 million (500k married filing separately) of home acquisition debt that was taken out either 1) before December 15, 2017 or 2) under a written binding contract that was in effect before December 15, 2017 to close on the purchase of a principal residence before January 1, 2018 (as long as the residence is actually purchased before April 1, 2018).

Notably, home equity loans and lines of credit qualify as acquisition debt if the debt proceeds are used to substantially improve a primary residence or designated second home. The interest on such loans is still deductible, but subject to the new $750k ($375K married filing seperately) limits, which the IRS clarified in News Release IR-2018-32.

Also worth mentioning is that refinances of grandfathered acquisition debt continue to be deductible to the extent the new loan balance doesn’t exceed the old loan balance at the time of refinancing. (IRC Sec 163(h)3(F)(iii))

As an example of these new rules, let’s say a taxpayer named Susan took out a loan of $950k to purchase a principal residence in 2015. In 2017, she opened a HELOC and borrowed $65K to pay off some credit cards and take a vacation. In 2017, Susan deducted interest on both the home acquisition loan and the HELOC for regular tax purposes (and excluded the HELOC for AMT).  In 2018, Susan will continue to treat the first mortgage as deductible qualified residence interest (under the grandfather rules) but will no longer be able to deduct interest on the HELOC. If Susan had used the funds from the HELOC to remodel her kitchen, the HELOC interest would have continued to be deductible (because it would qualify as acquisition debt). If Susan had purchased her home in 2018, the portion of her interest attributable to the balance above $750k on the first mortgage would not be deductible.

If you have any questions about the new rules for the deductibility of home mortgage interest, or any of the new tax provisions in the Tax Cuts and Jobs Act, contact a qualified CPA financial planner.